When I’m out walking, my dogs and the dogs I walk are constantly being trained. Whether it’s reinforcing a recall, a wait or focusing on me, my dogs are always learning. Dog training doesn’t stop once your dog learns a trick or a command. Training is a life long commitment and doing a little every day means you keep your dog working the way you want. Bad habits and behaviours can easily creep back in if you’re not the one in charge of giving your dog a job to do! I have border collies and they always let me know if I start to slip in my training as they go self employed!

Like you or I, dogs do not like working for free. A pat on the head isn’t always a good enough reward, especially if you have asked for something that requires a lot of thinking or exertion. For example, when I do agility with my dogs and I’m teaching them a new piece of equipment or something that requires a bit of thinking, I can’t expect them to be willing to do it if they get nothing in return. Would you head off to work, slog your guts out and then be satisfied with just a kind word from your boss without the pay?

I know I wouldn’t and dogs are the same. 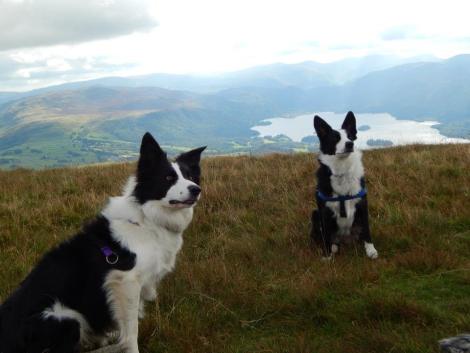 Waiting for a command

Different dogs will work for different rewards. Brae will do whatever you ask of her if she gets a tuggy toy or ball for her trouble, while Brenna only lives for treats (Taryn is somewhere in between!)

The kind of food rewards you use depends on what you’re teaching and how food orientated your dog is. When starting with a new command, you should start off with something high value, like liver, chicken, cubes of cheese etc.

Then there’s a sliding scale of treats from there all the way down to regular kibble. As you train your dogs you will get to know what works for what type of training. 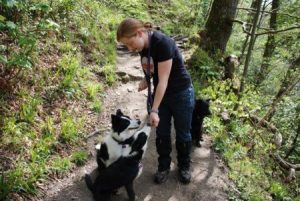 My girls receiving their reward for sitting and focusing on me.

One of the most annoying things I hear while out walking is ‘Oh you’re bribing the dogs to sit and wait, no wonder they do as they’re told!’ Grrrrrr *Angry face!!!* A statement like that tells me that the person with the dog spinning wildly on the end of a lead, barking and lunging (while mine all sit and focus on me!) knows very little about dog training and that they don’t understand how it works. And that’s OK, I don’t judge (well….. much!) because I too was once ignorant to how training actually worked. However because I wanted to do better for my dogs, I educated myself and found a whole new world of training.

When I’m out and I see another dog and walker coming towards me or someone out with children or a cyclist, I call to my dogs to me and I touch my pocket. My dogs know that means I want their attention. As they come and sit in front of me and focus on me, I first verbally reward them then if needed I reinforce the reward with a little, middle value treat. The food reward isn’t always needed, but sometimes I need to really make sure they stay focused on me. The food reward is random, they never really know when I’ll dish out a treat. Sometimes it’s a verbal reward, sometimes it’s a toy. What they do know is that they WILL get some variety of reward for doing as I asked. That is not bribery. That is training. A bribe is when I use a treat, show it to the dog and then lure it to do what I want. Now a lot of training does start out like that, however as the dog learns what I am asking for, you remove the lure and replace it with a verbal command with the reward at the end.

Training this way means that by using a verbal or even a nonverbal cue, you can get a ‘Pavlovian’ response. For example, when I take Taryn’s lead off my neck while we’re out, she will automatically walk towards me, wagging her tail ready for me to put her lead on. I don’t need to say a word. How did I train that response? Simply by rewarding her each time she came to me to have her lead put on. Lead in one hand, treat in the other hand and as I touched her harness or collar to put her lead on, I’d feed her the treat.

Does she get a ‘bribe’ each time I put her lead on? No.

“You don’t work for free, so don’t expect your dogs to!”

So don’t be afraid of the treats, just learn to use them properly and you will have a dog that works it’s little socks off for you!

Thanks for reading folks!

This website uses cookies to improve your experience while you navigate through the website. Out of these, the cookies that are categorized as necessary are stored on your browser as they are essential for the working of basic functionalities of the website. We also use third-party cookies that help us analyze and understand how you use this website. These cookies will be stored in your browser only with your consent. You also have the option to opt-out of these cookies. But opting out of some of these cookies may affect your browsing experience.
Necessary Always Enabled

Any cookies that may not be particularly necessary for the website to function and is used specifically to collect user personal data via analytics, ads, other embedded contents are termed as non-necessary cookies. It is mandatory to procure user consent prior to running these cookies on your website.