It’s been a wee while since I wrote a blog, 2021 is skipping by at lightening speed and life is still very uncertain.

We can all agree it’s been a bit of an arsehole year, with no holidays, no pubs and no hugging your family. However I feel it will get worse for us and our dogs if we aren’t careful.

I’ve said this for years, but we are heading for a future which will see your furry best mates permanently confined to lead walks only when outdoors, unless they’re in a designated dog park area like they have in America (that’s a whole different level of hell which I won’t discuss today!)

With every news story of sheep being mauled or someone being bitten, there is a cry for dogs to be kept on lead when out in public. Now a dog has mauled a beloved seal, which had to be put to sleep this week, and all I’m seeing on my Facebook feed is discussions on dogs being kept on lead all the time. The worrying thing is, most of the comments agree with it.

Don’t get me wrong, I absolutely agree that dogs should be on lead when the situation calls for it, such as near roads or in built up areas, near livestock and other wildlife if your dog has a shakey recall and when doing training. However to say ALL dogs must be on lead ALL the time is utterly ridiculous. What we need is education and getting owners to actually TRAIN their dogs and to stop walking around like entitled morons.

I got punched in the face 2 years ago by a guy I had previously asked to put his dog on lead as it had attacked my dogs several times. He didn’t like that and spent years giving me verbal abuse over it before actually punching me, all because he didn’t like my request to control his dog.

That’s the shit we need to deal with. All he had to do was to have CONTROL over his dog, which is what is lacking in an awful lot of today’s dog owners.

I have had countless dogs run up to me and my dogs. Most were friendly but a considerable portion were not, or at least ‘over friendly’. Recently I’ve seen the same spaniel run up to my group of dogs and not give a blind bit of notice to the owner shouting the dogs name. Little spanner was super friendly and very cute, however she caused my on-lead dogs to go a bit wild with excitement. Now, had I been walking reactive dogs, that lovely young spaniel may have ended up being bitten and the owner would have blamed me. Or worse, said it was good because her dog ‘needed to learn’ *epic face palm*

What Can We Do?

I’m not sure if the law would ever pass about dog control, but it wouldn’t surprise me at all. People are rightly getting pissed off with dogs running up to them and their kids (even Thea is scared of dogs running up to us and she has grown up in a houseful of dogs), jumping up on them, harassing other dogs and pooping all over. I’m sick of it, and I’m tired of hearing the same old cry of ‘don’t worry, he’s friendly!’ as owners have 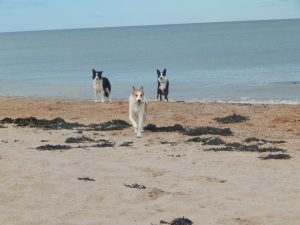 zero control over their dogs.

However punishing all dog because a few owners are entitled brats is not the answer.

Dogs need to run and play and work off energy in a variety of ways, and one of those ways is off lead. Can you imagine the levels of poor mental health which will arise in our well-trained dogs if they suddenly aren’t allowed the freedom they have previously enjoyed?

I know I’m preaching to the choir here, but we NEED to make canine education more widespread. However there will be resistence from those who don’t care about training their dogs and those who think they know best, simply because they have owned dogs for X amount of years.

It is my mission to help owners with the basics which will keep their dogs safe and under control, because if people get even more pissed off with dog owners, then the future freedom for our furry mates could be bleak.

With this in mind, I’m launching my Train N Trek service. I take your dog out over 6 sessions and teach recall, loose lead walking, focus on handler, wait/stay and general manners, as well as enjoying an adventure at the same time. I’ll meet wth owners to make sure the training can be continued at home and offer email support. Owners will get access to my members area, video content and will have the chance to carry on training with me after the 6 week block. They will be able to join my group adventures at a discounted price, or carry on with monthly solo training sessions.

I don’t want a world where dogs lose their freedom and I hope you don’t either.

Lets up our game and make sure it doesn’t happen.

If you want to know more about my Train N Trek service, please email me on born2run@live.co.uk.